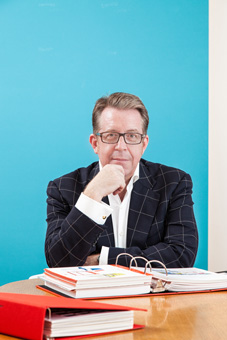 Mr. Wildfoerster is known for the personal attention he devotes to every client, accompanying and guiding them through the creative process and ultimately bringing their visions to life.

From an early age, Mr. Wildfoerster developed highly attuned artistic sensibilities. His family had been specialized in the silk embroidery business in Germany before coming to the United States. The son of a noted architect who studied under Bauhaus founder Walter Gropius at The Harvard University Graduate School of Design, Mr. Wildfoerster was surrounded by creative influences and immersed in European culture and traditions. Much of his childhood was spent accompanying his father to job sites and visiting architecturally important historic and modern buildings, by means of which he started to develop his own aesthetic vocabulary.

By age 20, Mr. Wildfoerster was deeply immersed in New York City culture, from opera, ballet, and classical music to the visual arts. He studied musicology at New York University; followed by classics at St. John's College in Annapolis MD; psychoanalysis at the Mid-Manhattan Institute for Psychoanalysis; and German and Italian comparative literature at Columbia University – an eclectic education that was instrumental in the development of his appreciation of beauty, in all its forms.

Upon finishing his studies, Mr. Wildfoerster set out to test his creative design wings in Old Europe. He spent five years in Italy, at the side of iconic ballerina Carla Fracci, where he assisted in the decoration of her homes in Milano, Florence and Venice. Young, curious, and passionate, he was mentored by a group of Italian connoisseurs -- individuals who collected deliberately and with pleasure, building on inherited family treasures. Traveling throughout Europe, he discovered the best sources for rare and custom made decorative objects, fabrics, furniture and lighting.

In addition to other culturally and architecturally rich influences in his life, Mr Wildfoerster has also lived in a number of prestigious residences, from an 18th century farm house, to an Ogden Codman ballroom, as well as an elegant apartment in the historic condominium building: The Apthorp in Manhattan, not to mention Stendhal's apartment in Milan, the Palazzo Mocenigo in Venice, and the Palazzo Pecci Blunt in Rome.

After many years spent working in Europe, Frederick returned to New York City, where he started his own design firm. Today, his passions and preferences continue to inspire the design process as well as the team at Virtus Design.